Microsoft… Well, unless you’ve been living in a cave for the past few decades, you must be pretty familiar with this name. Let’s briefly remind us the Microsoft success story.  It has been founded in 1994 by Paul Allen and Bill Gates (you know, the guy we’ve all dreamed of sharing a bank account with). The name Microsoft comes from the fusion of the words microcomputer and software. Indeed its activities are focused on computer software, hardware and consumer electronics. Its products are in our daily lives under the famous brands Windows, Office, Skype, MSN or Xbox and many others. Microsoft has a worldwide presence and in 2015 registered a revenue of 93.58 billion US dollars.

We were able to visit the Seattle Campus of Microsoft on Friday February 12th. There we had the chance to have 4 french managers talking about Microsoft and answering our questions.

How is it to work at Microsoft?

To answer that question, all 4 managers emphasized the importance of having diversity in the corporate culture. Indeed, understanding the people you are working with, their habits, personalities and ways of working, is essential. It’s generally referred to as cultural differences, especially in the multi-cultural context of Microsoft, however when you dig deeper, you realize that it’s more about personality differences than cultural ones. “You have to take into account the background of your teammates, and this is true for every company you work with”, advised Solène Perdrizet, HR executive. 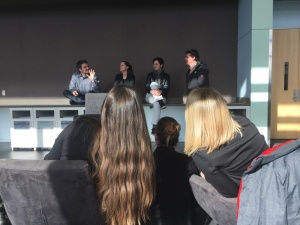 Some of us were surprised how casual the staff of Microsoft was: they were casually dressed, sitting on tables and talking straight to the point. They explained that even if everything looks informal, a strong hierarchy exists. You can have fun with your General Manager and the Vice President but still have to be careful about what you say. A major aspect of working in teams at Microsoft is the 360 feedback. That means getting feedback on your work from every coworkers around you no matter what their hierarchical status is. Our guest speakers then described the values and core beliefs at Microsoft: passion and result. They all agreed that passion is the first driver to show good results at Microsoft. Accordingly, the new moto of Microsoft is “Achieve more”. Other strong values are challenge, collaboration and questioning. All these values fit the personality of Bill Gates and the image he wanted to give to his company.

Last but not least, people at Microsoft stress the importance of transparency within the company, which means that everybody has access to different levels of information. This enables Microsoft members to understand why executive teams make certain decisions and where the company is heading.

Now you may wonder how can a GEM student enter Microsoft?

Opportunities at Microsoft aren’t limited to computer science, as some might think. Since it’s a global company they have positions in many different areas like sales, marketing, finance or human resource. The main requirements are to be curious, multifaceted, to be keen on improving things and to understand how they work. They also underlined the fact that you don’t necessarily need to come with a specific training since you can totally switch sectors from what you’re specialized in to new departments and get trained there. Your potential development matters more than the set of skills you already have. Even though being geeky might be a plus it isn’t a requirement to enter Microsoft. 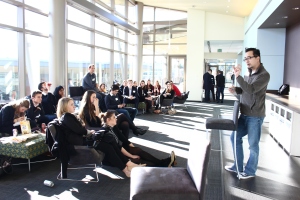 S. Seow: Tiny change at Microsoft can influence work of millions of people

The final words were given by Steve Seow: “The greatest thing about working at Microsoft is to see that a tiny thing you have changed on a product is used by millions of people all over the world, to see that you changed something at that scale”.

Big thank to Steve Seow (at the back), Eric Mittelette, Solene Perdrizet, David Courion, and Olivier for hosting our group. 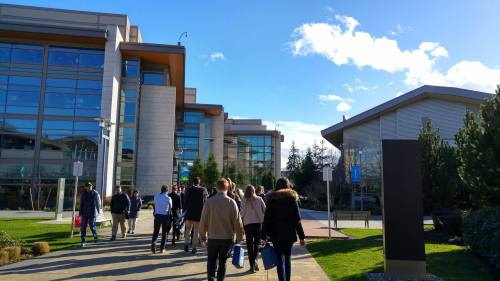