At the 1st EFMD America Conference in Sao Paulo, a panel of corporate experts from  Valor Econômico, Avon, PwC and General Electric animate at lively and informative discussion on the state of education in Brazil and how executive education can help the business world.

Alexandre Caldini, CEO, Valor Econômico, Brazil, began by explaining the context of education in Brazil. The country is still lagging behind in education and there are therefore many opportunities for executive education.

Brazil is still only 70th ins the world for enrolment in elementary education.The country is still poor in maths and science and this is a handicap to companies in the country.

GDP should remain stable around 4% for the next few years in Brazil. This requires companies to train their employees more to gain in productivity. However, labour costs are growing rapidly and many companies are actually facing labour shortages in some sectors.

Unemployment is around 4%-5% which is the equivalent to full employment. This means that there is a shortage of labour in many sectors. “It is like a revolving door.” Said Mr. Caldini. “As soon as one person is laid off they are immediately hired by another company.” This is putting a strain on the economy.

João Lins, Partner at PricewaterhouseCoopers Servicos Profissionais Ltda., Brazil, shared the results of a study done by his company:

Adapt to Survive: a global study about talent adaptability and its implication for economic growth. 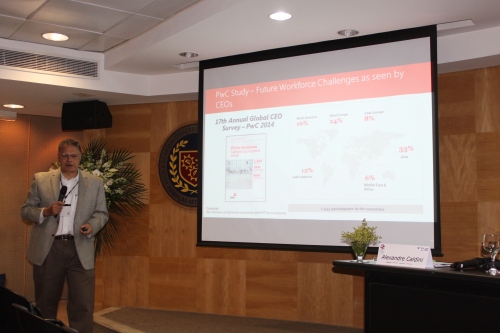 They talked to over 1000 CEOs in the world about the challenges in their companies.

The main concern was the skills gaps. 63% of CEOs thought threats in the market could have an impact on the skills gaps. This is up from 46% in 2009 and Mr. Lins underlined that this has changed since the financial crisis. In fact, the problems faced by companies are more a qualitative problem rather than a quantitative problem. Problems in firms are so complex that companies are not able to adapt quickly enough to keep track with the speed of change.

The researchers saw a positive correlation between the talent management and ROI. Indeed, they calculated that if all the countries were as adaptable as The Netherlands $100 billions of savings could be made. Brazil alone could make $12 billion potential savings.

Mr. Lins surmised that education made a positive contribution to making the workforce more adaptable. “There is a need for individuals, employers, educators and governments to think about how they can develop skills in adapting to changes in the economy and the market.” he concluded.

According to Fragueiro and Thomas, the world has gone through a state of semi-globalization.  Though businesses are concerned by working globally, and many of their operations are handled on an international level, there still remain a lot of local idiosyncrasies, which include consumer habits and behaviors.  Business schools have been under pressure to adapt to this by giving their students a global outlook, but also remaining schools that are directly involved with their communities.  The financial crisis has added to criticism of what has been done in business schools, with one former Dean of a top business school even suggesting that the diploma should expire every 10 years, since clearly what was taught is no longer relevant.  Increasingly, the business school curriculum is being asked to offer a value proposition way beyond status and salary.

Peter Gomez began his talk by decrying the fact that we seem to want more and more data. This is not what we need, in actual fact, we need to see patterns within business and society instead. 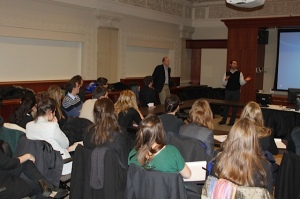 Ian Warner and Federico de Giuli, respectively CEO and CIO at APRIO, gave a talk about their business to GEM and SFU students as part of the corporate visits co-organized by both schools on the 11thof February 2014.

One response to “1st EFMD America Conference: Executive Education and the Corporate Perspective”