An interview with Tim Brown, CEO of IDEO (Part 1)

IDEO is known as being one of the world’s most innovative design firms. The maker of Apple’s first mouse and one of the first PDAs, the Palm V, the company shot to fame when ABC Nightline made a short documentary on how they designed a new shopping cart. At a recent conference in Vienna, I met up with IDEO’s CEO, Tim Brown. He describes the company as “a group of people that come from many different backgrounds that use design thinking to tackle a broad range of systems to level challenges from all kinds of organisations.” In the first part of this two part interview, he describes what makes the company unique from more traditional organisations.

How do you consider IDEO to different from other companies?

I think we are unique in the sense of the history that we have had and the way that we have assembled the group of people we are but there are plenty of other design companies out in the world, some of them quite large scale. We overlap with some of the management consulting companies and even the big advertisement agencies but I would not say there is a carbon copy of IDEO, at least not that I have found so far.

So what makes you different?

I think there were some sorts of accidents of history to be honest with you. Early on, we realised the value of bringing quite dispersed disciplines together by using a shared, creative methodology. In IDEO, you’ll find every flavour of engineer to every flavour of designer to practicing physicians, chefs, film-makers, writers, business people and entrepreneurs. We have had this shared creative methodology from the beginning and we bring together engineers and designers to work on new technology parts, such as mouse parts and laptops and so forth. It is  hard to do, but when you do it, it is a very powerful combination and is something that most organisations have not managed to do.

Why can’t other organisations just replicate your model? 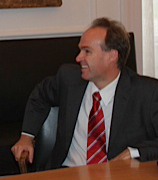 In theory there is no reason why they could not replicate the model but they have got to want to. I believe that we really wanted to do it, so it is a cultural thing. When David Kelly founded the company, he wrote a letter to the five people who wanted to found it and said that he really only was interested in founding a company where he could work with his friends. He worked for large businesses such as NCR and hated it. So there was a cultural set of values straight from the beginning which had to do with collaboration and cooperation. These are really deep within the DNA of the company, in most large companies that DNA and the notion of cooperation between different disciplines or different departments of companies is not there, but it has been there right from the beginning at IDEO.

As CEO of the company, you do not have the same command and control as in other companies, is that a handicap?

It is not a handicap for me because I would be hopeless in trying to command and control, I am just not smart enough to do that, but what I have got are 65o incredibly creative people. The best ideas for the future IDEO are in the organisation somewhere, so my job is much more of a curatorial job or sometimes editing and also storytelling. I see my job partly as defender of the faith, to make sure we don’t forget the values of making us powerful and strong.  It is very easy to get distracted by things, such as business. I see my role partly as patent recognition, patent making and storytelling. And I spend a lot of time out in the world, learning about the world and taking IDEO into the world, but I spend a lot of time in IDEO, moving around different parts of the organisation, trying to make connections between what we do and I do take responsibility for articulating what our future strategy is going to be but all of the ideas come from other people.

Is IDEO democratic then?

We do not vote for many things, so in that sense, no. There is quite a lot of emergent consensus if you want to put it that way. But I wouldn’t actually say that it is democratic. IDEO is not hugely hierarchical, there are layers in the company, but not reporting layers in the traditional hierarchical sense, the layers have to do with how we manage people and make sure that people have good career paths and so forth. But from a classically political sense I would not say that we are hugely democratic, however I am not sure what we are, I am not sure to what the political analogy for IDEO is.

What is the future for IDEO? What are the challenges?

The challenge is being fairly expensive consultants, which is a tough business model in some ways, easy to manage in many ways but tough in others. We have done quite a bit of experimentation over the past few years in looking at ways to disrupt ourselves and launched our own open design platform called Open IDEO. It is a great place for instance if any of your students want to experiment in participating in design, to explore pieces of the design process. If they do participate they get some feedback. Open IDEO does what IDEO does but much less expensively. We are doing some experimentation on our own and trying to do a ‘Clay Christensen’ on ourselves, we also launched a non-profit a few years ago so that we can spend more time working on big social challenges in a less expensive manner and can raise philanthropic funding to do it. We are building towards platforms to help our clients and help the world to use design more effectively, open idea is one of them but there are others. Overall we are looking to add to the consulting business, to help us have more impact and hopefully also hope to make the business a bit more resilient than in the past.