An Interview with Tom Enders, CEO of EADS (Airbus) Part 2: Strategy and execution in the aircraft industry)

Tom Enders is the CEO of EADS, the parent company of Airbus, the giant commercial aircraft company.  EADS is a pan European corporation that employs over 140 000 people and generated revenues of nearly €57 billion last year. In the second part of this three-fold interview, Tom Enders talks about strategic execution at Airbus and EADS, how politics can influence strategic plans and the relationship between Airbus and Boeing.

EADS’ strategy Vision 2020 aimed at balancing Airbus from 67% of your revenues to 50%.  Is that still feasible?

No, I don’t think it’s feasible. However, it’s more of a luxury problem, because Airbus is growing very well, while our defense business is not. This ties in to the investors’ negative reaction of the proposed merger with BAE last year because they believed that mixing a commercial business with a shrinking business was not a good idea for the bottom line.

Enders’ philosophy has always been to do significant steps to improve one’s strategic position.

My philosophy has always been to make significant steps to improve one’s strategic position, rather than relying on a time-consuming, and expensive series of moves. The project with BAE was significant, and with just one stroke, it would have fulfilled the Vision 2020 targets.  However, I don’t see several of those targets happening now. 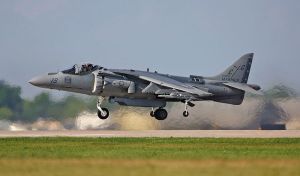 96% of BAE’s activities are in defense business.

80% of the company is in a non-defense business that is growing. Initially, in strategy talks back in 2007, the general thought was that Airbus was a highly cyclical and risky business.  With the 2008 Lehman crisis, our instinctive reaction was to fasten our seatbelts, thinking that our commercial business would be going down. Yet, with government funding being constrained, the defense business went downhill instead.  It is because of the increased growth of Asia, that Airbus’ cyclicality is no longer the same as predicted.  For the time being, I think the set-up of the company is quite satisfactory. I’d rather have 75% in the commercial business, versus BAE’s 96% in its defense business.

Why do you think the merger with BAE failed? Was it just politics?

Such an endeavor was hardly plausible with the state of Europe.  It was a mutual decision between Ian King, the CEO of BAE Systems, and I in pulling out of it.  It was indicative of the state of Europe and European integration.  Our industry is, like it or not, quite close to politics and political decision-making.

As a company, is there any way to overcome this difficulty of politics, or do you just have to live with it? What could you have done differently?

Retrospectively, we knew that our chances were not much higher than 50%, because of the political complexity, and based on receiving the approval of three European governments, as well as America accepting this, as BAE has a lot of operations over there.  The political hurdles were not necessarily rationally motivated.  There were a lot of domestic considerations and symbolism such as where the headquarters would be.

Neither our or BAE’s investors were particularly fond of this merger.

Another negative thing was the reaction of investors. Neither our, nor BAE’s investors were particularly fond of this merger. 98% of EADS’ investors invested in us only because of Airbus, caring about the top and bottom line and wanting to ride the wave of growth. They were worried that adding a defense business would dilute this. BAE, on the other hand, with 96% invested in defense, had told their shareholders for many years that being commercial was futile. When their investors found out about the merger with a big commercial company like EADS, they could not understand that.

Due to the strict UK Takeover Rules, we were kind of fighting at that point with one hand behind our back, and we could not go into details with our synergy planning. However, although we could have done things a little differently on the investors’ side, in the sum of it, both companies acted very professionally.  Really, all that was lacking was political support

You were very committed to this merger. How do you stay motivated, personally and as an organization after such a set back?

I was fully engaged because I thought it was the right thing to do.  I think it’s important for CEOs to be engaged in what they do, once they are convinced it is the right thing.  Yet, they should also not get carried away and develop tunnel vision.

There are always other options. I was very relaxed about the merger, because I knew that even with a failed merger, I was not risking the company.  EADS is largely carried by Airbus, which was not directly impacted by the merger.  Our operational business was coming out of this merger project totally unscathed.  Then, we took an opportunity and decided to change the governance.  What we have is corporate governance that I would not have dreamed of a year ago. We designed this for the joint company and now we have this for EADS alone. Government rights are now completely separated from shareholder rights.

We were able to turn a defeat into a victory.  I have to admit, it was not a masterpiece of long-term thinking; it was situational response.  Can we salvage the plans we have developed for the corporate governance and apply it to the company? We did and it worked.

How do you think the new governance will help you? Will politicians still be able to block important decisions?

Governments in our industry always have a big say – with or without shareholding. It’s the nature of the business. But it is interesting to note that most of our investors are Anglo-Saxons, not French or German. You can see that, ever since we concluded our new governance agreement in December, our share price went up from $27 to $43.  This is particularly after Lagardère and Daimler left EADS, leaving EADS with a Board of Directors that is now independent. However, our friends from Seattle [Boeing] would always try to keep up the perception that our company is government-run.

Well, one point we launched a Pinocchio nose advertisement against Boeing.  This was about the competition between our A320 Neo and their 737 Max.  They were telling lies about our performance, so we came up with that Pinocchio nose.

Yes, the competition is real and sportive. And don’t forget: Coming second in a duopoly is not a silver medal, it is a defeat. Yet, I have a good, professional relationship and a lot of respect with my counterpart at Boeing, Jim McNerney. I certainly do not underestimate him, but I sure hope he underestimates me.

Is there a day that a real competitor will come from Asia in the near future? 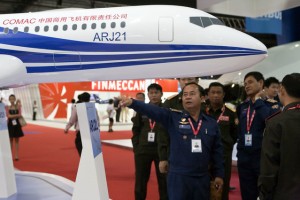 Asia has the financial resources and smart people to become significant competitor.

Yes, absolutely. Asia has the financial resources, the smart people and the ambition.  Notwithstanding the entry costs in this industry, Asia has the determination to achieve this.  Basically, anyone who can bring man into space and back should be able to build great commercial aircraft. The Canadians, Russians, and Brazilians are also trying.

However, in the coming years, Airbus and Boeing will be launching planes with 800+seats.  This is definitely possible with our A380 plane already.  We just need to get the customers.

Good management is long-term planning but also opportunism when it comes along.

“No battle plan ever survives first contact with the enemy.” –von Moltke

This is why I think that top managers, who are too rigidly focused on career plans, are embarking on a dangerous course.  That isn’t to say you shouldn’t have Plan A, B, and C, but you should prepare your team to react to the unanticipated.  This is parallel to what happens in battle. You have your plans, and you know your resources and troops.  You need to act always on something that you had not expected.  Business is no different, because you are dealing with so many unknowns.

Every time a new plane is launched, there always seem to be delays in production and technical difficulties. Is that a necessary part of constructing a new aircraft?

If you look at our track record, this happens more than it doesn’t. This has to do with technological complexities for all new aircraft developed from scratch.

If we are able to avoid a completely new development, like the A320neo, where the “new” is limited to a new and efficient engine, the risks and costs are much less for the customers and us.  There are not many teething problems. 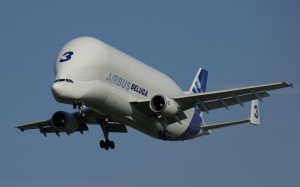 The purpose is to avoid development of entirely new aircraft.

What the customers want is a plane with a good price and value and a highly reliable aircraft.  However, this is why our launch customers get a special price as the first customers of a particular product.  I think it is unrealistic to expect that an entirely new aircraft will have no problems at all.  For us, if we can avoid developing entirely new aircraft, that is great, because we make money on our old aircraft, not on our new ones.

Nevertheless, we do not sit back and let the difficulties get to us. We have learned a lot of lessons which we have applied to our new A350, which we will fly soon. It’s like the military.  It’s never quite the war you prepared for that is actually happening; surprise hits you quite frequently.  The complexity of planes nowadays is very high. You will never completely eliminate that element.

An Interview with Tom Enders, CEO of EADS (Airbus) Part 1: The challenges of running a large international corporation 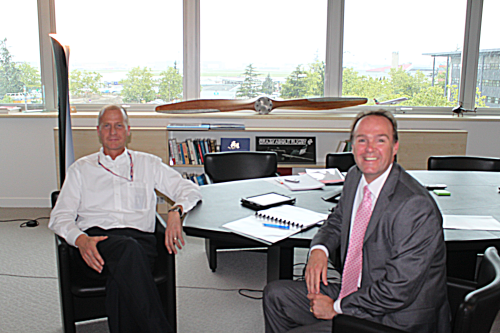 In May, I had the opportunity to interview Tom Enders, CEO of EADS. The company is often better known for its Airbus division. EADS is a pan-European corporation that employs over 140 000 people and generated revenues of nearly €57 billion last year. It is a fascinating company for many reasons; its governance with diverse political interests, the strategic importance of the aeronautical industry and the very international structure of the organization. I am very grateful to Tom Enders and his team at EADS for a very open discussion I had. 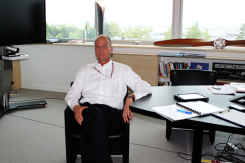 Tom Enders has had an interesting academic background, prior to getting involved in Germany’s political affairs and the German defense sector and then his corporate career at Airbus and EADS. In his early 20s, besides the University of Bonn, he also went abroad to the United States to study economics, politics, and history, an experience that gave him a launch into ‘going international.’ He offers his advice for young business graduates in their 20s today.

“To know how to buy, you must know how to sell.” Lessons on Purchasing and Networking with Philippe Grau

Philippe Grau, an alumnus from Grenoble Ecole de Management (graduated 1997), is currently a Commodity Sourcing Group Leader in Airbus’ Procurement, an Organization with over 2000 employees, including buyers, sourcing group leaders (like Philippe), multi-functional team leaders, supply chain specialists, and many other professionals.

A GEM Alumnus’ Account of His Time at Airbus: Insights into the European Working Context

Navir Rustomfram-Shukla, a recent alumnus from Grenoble Ecole de Management, is presently working at Airbus as a financial controller. He had previously studied at the University of Mumbai in India and graduated in Economics before veering off into business.

4 responses to “An Interview with Tom Enders, CEO of EADS (Airbus) Part 2: Strategy and execution in the aircraft industry)”