One of the last sessions at the AACSB ICAM 2013 was a panel discussion moderated by David A. Wilson, President of GMAC on the role of emerging markets and their strategic impact on business schools. The panelists were Edward A. Snyder, Dean and William S. Beinecke Professor, Economics and Management, School of Management, Yale University, Richard K. Lyons, Dean, Haas School of Business, University of California, Berkeley and Kathleen A. Getz, Dean, School of Business, Loyola University Chicago.

The mission based perspective

According to Richard Lyons, UC Berkeley primary concerns are “place, people and culture.” They remind their students constantly of four guiding principles.

All international development at Berkeley is therefore founded around these three principles. Groups are taken on study trips to places such as China with the specific mission of finding examples of how such principles are put into practice.

However, international development does bring some questions that need to be addressed. In an industry that generates 5% margins at best, having branch campuses may pull away resources from the main campus. The strategic nature of this development has to be understood therefore.

Berkeley is now relying more on the use of MOOC for teaching. Fifty percent of future courses will be online. But ask Dr. Lyons:

“How do you define ‘place, people and culture’ in an online world?”

Also MOOCs don’t get participants the same access to networks which are vital in today’s business world.

The historical and economic perspective 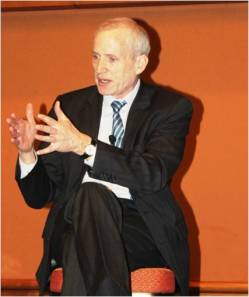 Edward Snyder: Major challenge for BS was to interact with people in the Post-Cold War era.

Edward Snyder, Dean at Yale University, took a more historical perspective of the international development of business schools. In his opinion, 1990 saw the end of the economic and political triad between the USA, Japan and the USSR. Business schools found themselves having to ask how they could react and work with the three billion people that were not connected to the world. This was a major challenge.

The last two decades has also seen the spiraling of costs in business schools. In 1990 and MBA in the USA cost on average $17 000. By 2013, this had increased to $57 000. The consumer price index increased by 2.5% per year during this period where as the cost in US business schools increased 5.7% per annum.

“If you increase you price every year by one percent above inflation,” joked Dr. Synder “You eventually get to a very high price!”

More seriously, the effect of this was to put many school in a really difficult position with their prices.

He went on: “If you believe in the flat world view and you raise your prices about inflation you will not get students from the emerging world.”

“This system is now dead and there is a need to find something more innovative.” he added. Competition is now coming from emerging markets and place like Ghana where the $3000 MBA is only a fraction of the cost of some US MBAs.

For Kathy Getz, Dean at Loyola University, Chicago, the key was to think about what is good for the students. Loyola has been able to piggy back on initiatives done by the central university in Vietnam and Beijing. Indeed, students returning from China had a much greater appreciation of the enforcement of corporate laws in general, IP in particular and the benefits of a free market economy.

Until now Loyola has shied away from starting new campuses because of the costs involved and the competition this could generate.

This was an excellent session that dealt with some serious ideas that dealt with in a light hearted and down to earth manner. The panelists were very honest and were even prepared to  talk about the failures they had had in their initiatives in emerging market. For example, Loyola had had issues with pricing in Vietnam which had made the creation of a sustainable program were difficult. As they stated from the outset “emerging markets are not only key to the growth and viability of international business, but also critical to the future of global business schools.” Discussing such issues then is vital to learning for future initiatives.

AACSB Annual Meeting (ICAM 2013): The European Affinity Group and the challenges of accreditation for European schools 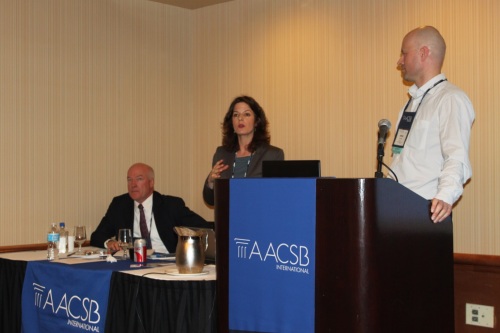 At the AACSB Annual ICAM Conference 2013, the European Affinity Group organized a session on the special challenges for European business schools in obtaining accreditation. This began with Rachael Weiss, Head of Student Experience and Accreditation at the University of Sheffield, entitled “QAA and UK challenges with Assurance of Learning” This was then followed by a discussion between different regions of Europe with some proposals on how continue with the work that has already been done.

At the AACSB ICAM 2013 Conference, Tony Wagner, Innovation Education Fellow at Technology & Entrepreneurship Center at Harvard, talked about the learning gaps that are affecting students across the world, and gave some strategies for how to prepare them for the new global knowledge society.

“I am always looking for cool pictures.” said Sheena Iyengar at the end of her excellent presentation on how to “Lead by Choice”. The quote was all the more remarkable in that the director of the Global Leadership Matrix (GLeaM) at Columbia Business School is totally blind. The objective of the talk was to highlight “what effective leaders need to know about choice” and how you can choose your way to success. Indeed, there is so much information available that it has become imperative today to know how to choose.

At the AACSB Annual Conference in Chicago, Dr. Michael Williams from Pepperdine University gave an excellent, practical talk on some of the strategies we can adopt for using different social media efficiently in our jobs. Dr. Williams recognizes that “we are all trapped in a high flow information world” and struggling to cope with all the different media forms that exist. The meeting was organized by the Associate Deans Affinity Group and was attended by 70 delegates.

At the AACSB ICAM 2013 Conference, Elaine Eisenman, Dean of Babson College, and Kai Peters, Chief Executive of Ashridge Business School, set out some of the main issues in executive education today. Peters described the period as being one of the “most Schumpeterian times for executive education” and business schools in general. The presentation entitled “The Ideal, the Real, and the Deal” first dealt with some of the key misconceptions concerning education.

At the AACSB Associate Deans conference, Karyl Leggio, Dean and Professor of Finance at the Sellinger School of Business at Loyola University Maryland, led a fascinating discussion on the issues in setting up new programs. The topic of the presentation was centered around generating revenues and “managing costs by benefitting from revenue sharing initiatives.” Given that we are now into the fifth year of the financial crisis with no easy end in sight, this is an important subject to address.