David Reyna was finishing his Bachelor degree in Chemical Engineering at ITESM, Mexico, when he decided that he wanted to gain some experience abroad. He thought this would be good for his CV and that perhaps even one day he might set up an international company. He decided against going to the USA thinking that it was too close and that as a Mexican, he might get a broader perspective by studying in Europe.

With the precious help of his home university, ITESM, Mexico, he filled out all the necessary paperwork, took the required English tests and was all set to go.

“I was thrilled with the idea of going abroad and studying in France.” says David.

He says that he had admired Europe and thought that France would give the most interesting perspective on business life there.

“I chose Grenoble because I heard about this city surrounded by mountains, close to Geneva, and full of foreign students.” he says.

He also added that he knew it would be cold and in the winter it was!

“I also knew how French people are really strict in academic field and therefore I wanted to live the experience of being an exchange student.”

David couldn’t speak any French when he arrived in Grenoble.

“´Bonjour´ was pretty much the only thing I knew about French language prior coming to France.”

However, since his classes were in English and French was taught as a foreign language he knew he would pick it up quickly. He was still a little apprehensive though about adapting to a new life.

“I was scared of the new culture as much as I feared to leave my life in México.” 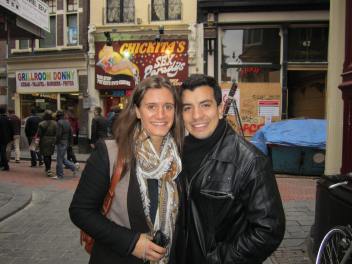 “I knew it was going to be a new start but I regretted nothing (In fact, I gained much more experience and I feel more confident and open minded now).”

David says that the experience gave him a huge amount of self-confidence and maturity. And what else did the semester bring him?

“A whole bunch of new friends, great experiences, challenging courses, and lots of travelling. I found out that French culture is very rich in arts and I fell in love with French language. I came home speaking good French with an International Business Certificate, but most of all, with another complete view of the world. “I am still looking for the pain au chocolat recipe and I miss the mornings of walking (late) to school with some of my European roomies.” he regrets.

“I will never forget the time I spent in this magical city.”

David during one of his numerous trips.

Today David works back in Mexico for Nemak which is part of the Alfa Group.

has a very international perspective. David job is to do strategic planning and negotiation for the company and he says that his engineering and business background have given him the skills to do this. Also, having worked in very international groups while he was in Grenoble, he is used to adapting to different cultures. His time in Grenoble gave him a lot more confidence which is now a vital part of his job.

So what advice would he give to students thinking of going to study in France?

“Try and make as many friends as possible,” says David.  “And stay as open minded as possible. You will need to use your social skills as much as possible to adapt to the new culture and to make the most of your time there.”

And one final piece of advice for any Mexican student coming to Grenoble?

“The food is good but you are going to miss spicy Mexican food. So don’t forget to bring a bottle of salsa sauce with you!”

Emma Hanes: “I would highly recommend Grenoble for a year abroad. It’s a large and dynamic city with plenty going on. It’s culturally very rich too, with regular jazz festivals, street markets and a good selection of museums, galleries and performance venues.”

Textbooks and Passports: “Nicole knows many former students who studied abroad and have gone on to have successful careers in business and education, and thinks their experience of living in a different culture and learning a new language helped them secure the top jobs.”

An American in Paris

IU Study Abroad Blog: “I also realized that Paris isn’t simply “the city of lights and love.” Instead, it’s a real city, just like Bloomington, just like New York City. While some things are good, some things simply aren’t.”

Niché Bragahi: How my studies in France encouraged me to pursue a career in teaching

Textbooks and Passports: “Studying abroad, according to Niché, “is about going out of your comfort zone, discovering new things, developing your linguistic skills”

Photo Essay: Mexico Through the Lens

The Cultureur: “The Beauty of Mexico in 50 Pictures by pxleyes; Mexico Photos by National Geographic;  Pictures for the Mexicophile by MexConnect.”

The Charm of Mexico City

The Cultureur: “When I finally visited Mexico City a few months ago, I fell in love with it. From the Bohemian culture of Condesa to the posh enclave of Polanco, Mexico City was a maddening mix of the old and new, and the rich and poor.”

One response to “David Reyna, chemical engineer, international businessman, strategic planner and lover of spicy food: A Mexican view of studying in France”