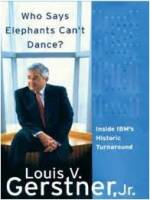 IBM so dominated the computing industry from the 1950s onwards that by 1980 the US government decided to set up antitrust commission to decide if it had too much power. By the time the commission gave in its report, IBM was heading towards bankruptcy. The man who saved them from that fate was Louis V. Gerstner and this book explains how he brought about a massive cultural transformation.

How could a company that could boast of more Nobel laureates than most countries and that had totally dominated the computer industry for decades get to the verge of bankruptcy? The state of IBM was so bad in 1993 that it took the unprecedented step of bring in an outsider to run the company. Louis V. Gerstner had made his name as a boss of American Express and then RJR Nabisco. By his own admission, he knew little about the computing industry.

On his arrival he found a chaotic system in which parts of the company were issuing their own sales figures to the press, his emails were being blocked by divisional heads and a system so rigid that enabled an employee to be fired from one department so that he could be hired by another. IBM is also classic example of the best technology losing out to a poorer one with Windows easily surpassing the OS/2 system.

Even if you are not remotely interested in computing this is a fascinating book to read for any student wishing to learn about cultural transformation. When Gerstner took over the company, Big Blue was in a mess and most experts were waiting for its failure. 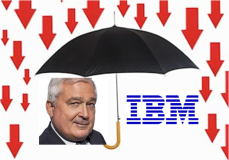 Gerstner advocated “tough, hard-nosed management” to get the company through the crisis

The transformation was relatively simple (it is from the outside). Gerstner turned the sales/administrative logic at IBM on its head. When he arrived only 20% of the staff were actually involved in any sales operations. By the time he left 10 years later, this was 80% and profits were back. He had begun by forcing all of his senior executives to go and visit their customers (Operation Bear Hug) to find where their problems lay.

But it wasn’t just sales that were a problem; so were production costs.“On average, our competitors were spending 31 cents to produce $1 of revenue, while we were spending 42 cents for the same end. When we discovered that we had a $7 billion expense problem!”

Gerstner probably was not the easiest of people to work for and openly advocated “tough, hard-nosed management” to get the company through the crisis. It can’t always have been much fun in the executive committee meetings. However, his insights on leadership, management, corporate culture and strategy are almost a case study in themselves. This is a great book.

I’ve had a lot of experience turning around troubled companies, and one of the first things I learned was that whatever hard or painful things you have to do, do them quickly and make sure everyone knows what you are doing and why.

If employees do not believe a crisis exists, they will not make the sacrifices that are necessary to change. Nobody likes change. Whether you are a senior executive or an entry-level employee, change represents uncertainty and, potentially, pain. 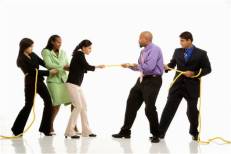 A me-centered culture was prevailing among executives at IBM

Prior to my arrival, bonuses were paid to executives based solely on the performance of their individual units. In other words, if your operation did well but the overall corporation did poorly, it didn’t matter. Your still got a good bonus. This encouraged a me-centered culture that ran counter to what I was trying to create at IBM.

Executives at IBM were not going to be granted stock options unless they concurrently put their own money into direct ownership of company stock.

But what was really draining was the recognition that while the people in the room were extremely bright, very committed, and, at times, quite convinced of what needed to be done, there where little true strategic underpinning for the strategies discussed.

What my colleagues seemed unwilling or unable to accept was that the war was already over and was a resounding defeat – 90% market share for Windows to OS/2’s 5%- 6%.

I came to see, in my time at IBM, that culture isn’t just one aspect of the game – it is the game. That’s because, as with national cultures, most the really important rules aren’t written down anywhere.

We think and act with a sense of urgency.

I like to call this “constructive impatience”. We are good at research, studies, committees, and debates. But in this industry, at this time, it’s often better to be fast than insightful.

People don’t do what you expect but what you inspect.

When a division president arrives first on the scene, then there’s no accountability for prior mistakes

Perhaps the only time you really get a totally objective analysis of business from a division president is when he or she first arriveson the scene. Then there’s no accountability for prior mistakes – it’s the prior incumbent’s problem!

Execution – getting the task done, making it happen – is the most unappreciated skill of an effective business leader.

Personal leadership is about being both strategic and operational.

Execution is the tough, difficult, daily grind of making kilometer by kilometer, milestone by milestone. Accountability must be demanded, and when it is not met, changes must be made quickly. Managers must be asked to report on their performance and explain their successes and failures.

One of the most surprising (and depressing) things I have learned about large organizations is the extent to which individual parts of an enterprise behave in an unsupportive and competitive way toward other parts of the organization. It is not isolated or aberrant behavior. It exists everywhere – in companies, universities, and certainly in governments. Individuals and departments (agencies, faculties, whatever they are called) jealously protect their prerogatives, their autonomy, and their turf. 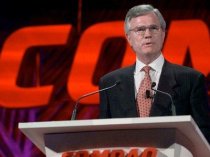 I love competitors who get hooked on revenue as a key target of their performance. I was gleeful in 1993 when I heard the head of Compaq announce that his goal was to surpass IBM in revenue by 1996. The analysts cheered! He went off and bought Digital Equipment, and I cheered! He was eventually fired, and Compaq has since disappeared as a corporation.

I have always believed that it is better to underpromise and outperform than to overpromise and underperform.

Businessweek: “In Who Says Elephants Can’t Dance?, Gerstner describes his entry into the top position at one of the world’s biggest high-tech companies and his many adventures at IBM before his retirement almost a decade later.“

How Lou Gerstner Got IBM To Dance

Forbes: “The book is interesting, even for longtime IBM followers, because it is Gerstner’s own story. He was a virtual recluse when it came to interviews and public appearances–he doesn’t try to hide his disdain for the media–so his words offer a rare opportunity to hear his point of view.“

Business Schools Should Teach You How To Tell a ‘Sticky’ Story

Modern World: “I was captivated by one of my favorite professors’ courses, in which he told us to ‘learn to tell a story that sticks’.  I matched everything together and got to an interesting conclusion. Business Schools should provide Marketing students with at least a basic set of creative writing skills!!”

Higher Education Management: “Unlike disruptive innovations, the OESP model does not seek to displace the traditional model of higher education. It’s not a direct challenge, but an extension of the existing model through the addition of services, skills and capital that are otherwise unavailable to the client university.”

Higher Education Management: “Ian Barker is the Founder of Symtext, a Toronto-based start-up. Symtext’s core product and service is “Liquid Textbooks” – in use at UCLA, San Diego State University, and by publishers like Oxford University Press Canada. I asked Ian to provide his view of the “start-up” experience in digital higher ed.”