No one would ever accuse Jack Welch of being short on ego. As leader General Electric for 21 years he imposed his style as one of the most charismatic business leaders of the 20th Century. He was known as being one of the world’s toughest bosses, and was dubbed Neutron Jack for his capacity to get straight to the point. Fortune magazine named him “The Manager of the Century.”

This autobiography (written by a semi-ghost writer) lays out the philosophy behind the changes that Welch put into place. It is a personal story and in the typical style of the man, it is very direct. If you want to read Proustian prose, this is not the book for you. If you want some straight forward arguments about how the company was run, you will certainly get a clear vision.

Like most good strategies, GE’s was quite a simple one. They defined three portfolio sectors and from there stated that they would either be number one or number two in each sector or would leave. This became a best practice for corporate strategy and portfolio management.

Putting it into practice was then a question of getting the right people to execute the strategy. The overwhelming image that you get from the book is that this was the key to the success.

The book also gives an interesting insight into HR practices at GE particularly with regard to training and promotion. Six Sigma is discussed in detail as well. Welch doesn’t spare himself and goes talks openly about his disastrous decision to buy the investment banking firm,   Kidder, Peabody and Co. in April 1986.

“The talent goes up and down the elevators every day and can go in a heartbeat,” he was told.  “All you’re buying is the furniture.”

Six months later, Wall Street was embroiled in a series of insider trading scandals which had knock on adverse effects on GE.

Charismatic leaders have gone out of fashion since the back slapping, high five days of the latter part of the 20th Century. This is 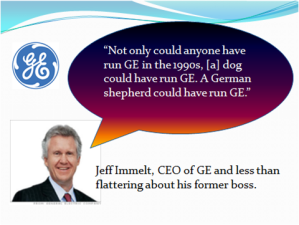 probably a good thing. Researchers such as Jim Collins now promote the famous level 5 leaders with their emotion intelligence, humility and capacity to develop a long term strategy. Welch’s successor, Jeff Immelt is a much quieter man though that doesn’t prevent him from expressing his opinions. Reflecting on Welch’s time at the helm he has declared that a dog could have run GE back in the 1990s!

Well, perhaps. Still, this book will give you an insight into how a very determined character ran one of the world’s largest corporations for over two decades. It is worth a read.

One of my most common errors was to hire on appearances. In the early days, I fell in love with great resumes filled with degrees in different disciplines. They could be bright and intellectually curious, but they often turned out to be unfocused dabbers, unwilling to commit, lacking intensity and passion for any one thing.

We managed businesses – not earnings.

I always tried to leave some goodwill on the table when the seller’s ongoing involvement was important to the company’s success.

Finding great people happens in all kinds of ways, and I’ve always believed “Everyone meet is another interview”.

In manufacturing, we try to stamp out variance. With people, variance is everything.

We never liked people more focused on the next job than the one they were doing. This could be a career killer.

When all is said and done, teaching is what I try to do for a living. Truth is, I’ve always liked teaching.

As usual, I was a bit over the top. I had learned that for any big idea, you had to sell, sell, and sell to move the needle at all.

Boundaryless was helping a lot of your ordinary people do some extraordinary things.

There are more mediocre people making more money on Wall Street than any other place on earth.

I remember being frustrated by how long the Japanese took to make a decision. But when they made one, you could bet your house on it. In over 35 years, almost every business relationship I had in Japan turned into an enduring personal friendship.

I always believed there was no such thing as a global company : Companies aren’t global – businesses are. I’ve given that speech a thousand times or more to make clear that the CEOs of each business were responsible for globalizing their businesses.

Some contend that globalization hurts developing countries and their people. I see it differently. Globalization never looks better than when you see the bright faces of the people whose lives have been measurably improved for having these jobs.

Every year, I’d send a handwritten note with the annual bonus to my direct reports. I’d write two to three pages, outlining what I was looking for in the coming year.

I was an outrageous champion of everything we did.

Don’t own a cafeteria: let a food company do it. Don’t run a print shop: let a printing company do that. It’s understanding where your real value added is and putting your best people and resources behind that.

It always made me mad when some politicians and economists claimed that all the job creation in America was coming from small entrepreneurial companies. Much of that, in fact, was the conscious transfer of work out of big business.

There are no modest revolutions.

Great people, not great strategies, are what made it all work. We spent extraordinary time recruiting, training, developing, and rewarding the best.

It takes self-confidence, courage, and a willingness to take the heat when you make the tough calls.

A discussion forum for individuals, managers and leaders on areas related to Organisational Psychology

Education and Empowerment: “I reflect on the foundations of what it means to be a great leader quite often.  How do I inspire? How do I appreciate and congratulate? How do I hold people accountable in ways in which their personal worth is still recognized?  This question of leadership is one of the questions with which I am consistently grabbling.”