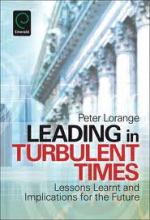 Jeff Immelt, CEO of General Electric, has said that anyone could have run the corporation in the 1990s. Conditions were so favorable that “a dog could have run GE” he claims. Not very flattering for his predecessor, Jack Welch!

Still, leadership is certainly easier when the economic outlook is good. The real test is during an economic downturn and given the difficult past 5 years books of this sort are more than welcome.

Peter Lorange has had one of the most illustrious careers in academia. Having begun his career teaching at MIT Sloan School of Management and Wharton, he then went on to become President of BI, Oslo and then IMD, Lausanne. He retired from this last position in 2009 but instead of dedicating his time to golf he bought the GSBA, Zurich and renamed it the Lorange Institute of Business. You might conclude that he has quite a bit to say on leadership and you would be right. This is an excellent book.

Most people would be proud of having had half the career of Peter Lorange. He record in academia is stunning, be it in the positions he has held or the vast list of publications. Not content with just that, Lorange also ran a successful shipping company for many years. He sold it in 2007 and was told that he was an idiot for doing so. Within a year the market for ships had crashed and Lorange was proclaimed a genius by the same people. With his modest, down to earth Norwegian style, Peter Lorange simple states that he was neither one nor the other, he just saw some of the signs of the impending crisis.

The book itself is a wonderful read. It gives a nonsense account of some of the major pitfalls it leading an organization or a group. Lorange draws on his experience both in academia but mostly from studies and consulting that he has done for different companies. There are a whole array of examples of good and bad strategy as well as good and bad leadership from companies such as Ford, Nokia, Motorola, GE, Marks and Spencer, ABB etc. They give concrete ideas and some illustrations of way companies have gone wrong.

Perhaps what makes this book even more authentic is that Lorange talks openly and honestly about his own failures during his career. The fact that IMDE refused to give him tenure deeming him to be “too aloof” or his difficulty in listening to others despite knowing that this is a critical skill for a leader. This type of candour is refreshing and makes the message his wishes to convey all the more effective. 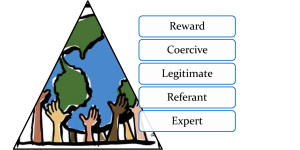 French and Raven identified five main types of power – reward, coercive, legitimate, referent, and expert. These sources of power are not intrinsic to leaders themselves, but dependent on how they are perceived by their subordinates.

“Harry Truman did not have one ounce of charisma … yet he was one of the most effective chief executives in US history” (Drucker, 2004)

I studied the relationship between profitability and growth for nearly 6000 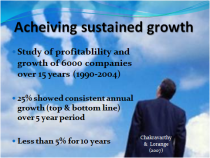 In 2008, Alan Mulally took only an annual salary of one dollar

In 2008, it was announced that the CEO of Ford, Alan Mulally, would only take an annual salary of one dollar and no bonus if Ford borrowed money from the US government (Isidore, 2008), stating that he would not draw a larger salary until Ford had returned to profitability and all the loans the company had received from the US government had been repaid.

Effective leaders have both professional credibility and administrative capabilities; yin without the yang won’t work.

The legendary former head of Scandinavian Airlines System, Jan Carlzon, said that, with hindsight, one of his major mistakes when he took over the airline was to eliminate virtually all the established aviation-technical competences in the company.

As the former leader of ABB, Percy Barnevik once put it, “We don’t need any more bright ideas. There are lots of them around. In business, success is 5% strategy, 95% execution.” As the ABB mantra goes, “Not to take action is the only non-acceptable behavior.” (Branegan, 1997).

Leaders must let members know on a regular, even daily basis, that they are spending a lot of time and energy on attempting to understand the business cycle.

You have to work with your enemy. Then he becomes your partner

Strategic choices are not always popular. You lead because you have a mandate from the organization, so people want you to make the choices that need to be made.

Nelson Mandela: “You have to work with your enemy. Then he becomes your partner.”

The longer you stay in a particular position, the harder it can become to listen

A leader drives change and develops other leaders

When somebody asks me, “At your level of the company, what does a leader do?,” I always say, “Drive change and develop other leaders.” Jeffrey Immelt, CEO, GE (Prokesch, 2009)

Just because it says CEO on your business card doesn’t mean you know it all, so you’d better keep learning or you’ll be out on your ear.

Fritz Leutwiler, CEO of IMD, to Lorange: “Peter, you are here to lead and this means doing what it takes to get the job done, not necessarily aiming to be popular.”

“The Lorange Institute of Business Zurich, Switzerland, brings together the worlds of global business practice and academic theory. The result: sound, creative innovations for an ever more complex business world.”

Barbarians at the Gate: Welcome!

Higher Education Management: “The tension between commerce and higher education isn’t likely to get less provocative over the next few years. While campuses have become accustomed to having vendors assume responsibility for functions like bookstore management, catering and building maintenance, the current focus of education investors is on creating technologies that serve instructional functions – matters that were once seen as the exclusive territory of academics.”