BOOK REVIEW: “Like a Virgin Secrets They Won’t Teach You at Business School” by Sir Richard Branson (2012) 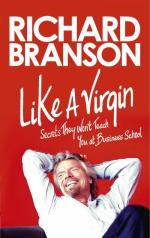 Richard Branson is one of the world’s business icons. If you work or study in a business school it is almost impossible to resist a title such as “Secret they won’t teach you at business school.” The result the book is…passable. A “B-“ I would say, which is probably better than most of us would score if we tried to build an empire like Virgin.

To the outsider it is almost impossible not to have a positive image of Richard Branson. He began life with the handicaps of being dyslexic and having attention deficiency disorder. He dropped out of school at 16 and then quickly built first a successful mail order company (an early Amazon). From there he went to creating a successful and high profile record company (Virgin Records and V2) and being responsible for the careers of stars such as Mike Oldfield, Phil Collins and the Sex Pistols. Branson has also launched an airline business (Virgin Atlantic Airways), soft drinks (Virgin Cola), to retail outlet (Virgin Megastores) as well as about one hundred other businesses.

Training is not a one-off thing

Despite owning a conglomerate worth of some 400 companies worth £5.01 billion (in 2008), he claims that he still doesn’t understand the basics of a profit and loss account. He has made himself famous by doing a whole series of publicity stunts and still cultivates the image today of being a 1960s drop out by running his business empire from the British Virgin Islands.

So, to the book. It is OK. It is a nice gentle read and the character and humour of Branson as quite clear. The format is rather strange in that the prose stops half way through the book and Branson starts answering a series of questions that come out of the blue.

Does it give you lots of secrets that business professors have been jealously hiding from their students? Well, it gives some interesting ideas, for sure. There are some good ideas for running an entrepreneurial business like Virgin. Branson constantly has a little notebook with him, spends a lot of time talking to people, encourages discussion and debates and clearly tries to get his team to test out new ideas. But this is nothing exceptional in itself.

The fact is that Richard Branson success is done to a few good ideas and then total dedication to promoting his company. Personality may also have something to do with it and that is difficult to copy. And, if you believe all the current books being sold in their millions such as The Black Swan and Thinking : Fast and Slow you will have to accept that there is a bit of luck involved too.

When someone on your team has a big success, celebrate it and tell others

It is also true that companies such have Honda and Canon have used the notion of core competence to develop despite having a very different corporate culture to Virgin. It is unlikely that you will find the CEO of Canon jumping out of a hot air balloon.

Branson is though honest enough to admit this. The book concludes with:

“My story is a very personal one; my strategy will not work for everyone.”

8 minute interview with Richard Branson in which he outlines some of the main themes in his book.

For me there is nothing sadder than hearing someone being apologetic about the place where they are working. Talk to your staff and customers at every opportunity, listen to what they tell you, good and bad, and act on it.

Fun is a serious business tool

Fun is a serious business tool

I like to think that we are successful at Virgin because we engage with everyone in a positive, inclusive manner rather than in an aggressive, combative or negative way.

Good people are not just crucial to a business, they are the business! One of the most common reasons people leave a job is because they were not listened to.

One guideline that we rely on is that if a new business has the potential to damage your brand in any way, you should not invest in it. For example, we wouldn’t start a cigarette company or a ‘defence’ contracting business. We feel strongly that there is little point in entering a new market unless it gives us the chance to really shake up an industry.

In our negotiations with Boeing, I stipulated that we could hand the plane back at the end of the first twelve months if the business wasn’t working.

A company where the staff overuse the word ‘they’ is a company with problems. At all the Virgin airlines for instance, if we are creating a new aircraft cabin we will always have the marketing, design and management teams involved from the very beginning.

Between 2000 and 2003, Virgin created three new billion-dollar companies, all from scratch and in three different countries. Virgin Blue (now Virgin Australia) took 35 percent of the aviation market and reduced fares dramatically. Virgin Mobile became Britain’s fastest growing network. Virgin Mobile in the United States was one of the country’s fastest growing companies ever, private or public.

Virgin could never have grown from Student magazine to the hundreds of companies it is today were it not for a steady stream of intrapreneurs who looked for and developed opportunities.

If death and taxes are the only sure-fire things in life, then the only certainty in business is that one day things will go wrong. One of your priorities has got to be emergency planning.

To be honest, when my friends and I started the first Virgin business forty years ago, we had no master plan – especially not one for a group of companies that by 2011 would number more than four hundred businesses around the world and employ 50,000 people.

Palm sold me on their own funky version of the MP3 player and a range of accessories. I insisted we push on and launch our very own MP3 player, Virgin Pulse! We spent $20 million designing our MP3 player and bringing it to market. Though that product and its successors were critically acclaimed in the United States, the Virgin Pulse bombed and we had to write off our investment.

One customer service mantra that I have always loved is ‘First to know, first to handle’

A good first step to ratcheting up your customer service would be to encourage everyone on your staff to take an active role in coming up with new ideas and solutions to improve the way your company delivers the goods to your customers.

Training is not a one-off thing. To stay on top of market developments, recurrent training and refresher courses should be an ongoing part of company life – and budgets.

One customer service mantra that I have always loved is ‘First to know, first to handle’.

A mistake often associated with the first step is signaled by an entrepreneur’s inability to clearly and concisely communicate their idea. Try using a Twitter-like template to refine the essence of your concept into just 140 characters. Once you’ve done that, expand your message to a maximum of 500 characters.

Adopt ‘talent without borders’- Employers must often jump through endless bureaucratic hoops to take advantage of the expertise available in the global marketplace. The world is flat now; its workforce is increasingly mobile.

When someone on your team has a big success, celebrate it and tell others

There are lots of things in life we think we ‘can’t get enough of’ and education is top of that list.

However, my story is a very personal one; my strategy will not work for everyone.

TNW Book Review: Richard Branson’s “Like a Virgin, Secrets They Won’t Teach You at Business School”

The Next Women: “The book does not disappoint. Branson’s personality shines through as he relates interesting pearls of wisdom gathered over many successful decades of entrepreneurial experimentation and barrier breaking. Branson’s advice is broken down into easily digested stories that are short enough to read in one sitting, but rich enough in content that it’s actually useful.”

Daniel Clough: “I’ve got mixed feelings on ‘Like a Virgin’ by Richard Branson. On one hand I like it because it’s an easy read. It’s broken into lots of short chapters and it therefore covers a good range of topics – there are definitely some gems in there. But on the other hand it wasn’t particularly exciting to read.”

UpNorthBusiness: “As you can guess there’s some ego to get past here with Branson’s latest book, Like a Virgin. But as Walt Whitman once said, “If you’ve done it, it ain’t bragging”. Well, it’s safe to say that Branson has accomplished enough for him to be able to what say just about anything he feels like expounding on.”

Like a Virgin: Secrets They Won’t Teach You at Business School by Sir Richard Branson: 18 take-home messages

Blueroselady’s Weblog: “There is a RICH in the name of Sir RICHard Branson, but being financially super rich apart, I view that he has other aspects of wealth that worth understanding & learning. Seeing the video filmed by the London Business Forum in Westminster Central Hall reminds me on many useful talks that inspired me in UK.“

BBC News: “Virgin boss Sir Richard Branson got dressed up as a female flight attendant after honouring a bet he lost to Air Asia chief executive Tony Fernandes. Donning a uniform, he served passengers on an Air Asia charity flight from Perth to Kuala Lumpur.”

The Value of Being Second

Booz & Company: “Oded Shenkar, author of Copycats: How Smart Companies Use Imitation to Gain a Strategic Edge, introduces an excerpt on the wisdom of entering markets after first movers from The Art of Being Unreasonable: Lessons in Unconventional Thinking, by Eli Broad.”

Education and Empowerment: “I reflect on the foundations of what it means to be a great leader quite often.  How do I inspire? How do I appreciate and congratulate? How do I hold people accountable in ways in which their personal worth is still recognized?  This question of leadership is one of the questions with which I am consistently grabbling.”

5 responses to “BOOK REVIEW: “Like a Virgin Secrets They Won’t Teach You at Business School” by Sir Richard Branson (2012)”