This week China will quietly commemorate the anniversary of the death of Mao Zedong. On the 9th September 1976, the founder of the Chinese Communist Party died at the age of 82. During that time, Chinese universities have followed the modernization movement within the country in their goal to become world-class institutions.

35 is about the age that a professor begins to be respectable in academia. Even if the white hair isn’t quite there yet, at least they can claim to have distanced themselves from the students they are teaching and have gained a bit of experience along the way.

This week China will quietly commemorate the 35th anniversary of the death of Mao Zedong. On the 9th September 1976, the founder of the Chinese Communist Party died at the age of 82. His death led to the events that brought Deng Xiaoping to power which in turn led to the massive economic transformation that the country has undergone.

35 years on, Mao’s gigantic portrait still looks across Tiananmen Square. One wonders however, if the former ruler would comprehend the people walking past. Long gone are the stereotypical Red Army uniforms. Young girls walk past in the shortest of skirts more reminiscent of the swinging sixties London. They carry multi coloured drinks in plastic cups (what happened to the hot tea in a flask?) that match their multi-coloured clothes and chatter constantly into an electronic gadget that is firmly pressed against their ear. Two things are now omnipresent; cars and tourists. Last year China overtook the USA as the world’s largest purchaser of cars and now ranks as the world’s 4th more popular destination for international holiday makers after France, the USA and Spain. Indeed, the Middle Kingdom is arguably more open today to foreigners (53 million last year) than it ever has been in its entire history.

There are so many articles and reports today about China’s impact on the world economy that it is difficult to know where to begin. Less documented, however, is the development the higher education system. This sector of the economy has perhaps come even further than the manufacturing industry that has brought the country such wealth. The Cultural Revolution of the late sixties led to professors being imprisoned, demonised and or sent to the countryside to work with the local peasantry to “re-educate themselves.” Any Chinese person over 45 (and universities all over the world have lots of them teaching) would have been caught up in this turmoil if for no other reason than lack of adequate education from fully qualified teachers during their early years.

Chinese students: Confident and with plenty to say

Today then, Chinese universities are still in a catch up with regard to their colleagues from the USA and Europe in particular.  The Shanghai Jiaotong University Ranking System which ranks the top 500 universities in the world has no Chinese university in the top 100.  The USA has 53 alone while Europe has 27  (UK 10; Germany 6; Switzerland 4; France 3; Sweden, Finland, Norway & Denmark 1 each).

SEE ALSO:
The Shanghai Academic Rankings 2012…and the winners are…

However, they are developing at a fantastic rate. Indeed, two of China’s top universities, Peking University and Tsinghua are now in the top 200. Mao would have been particularly pleased about the first one, having worked as a librarian there. 22 Chinese universities in all can be found in the world’s top 500 and the past few years has seen a net increase in the number.

In 2005 there were only 12, four of which were in Hong Kong.  Indeed, the Shanghai Jiaotong University has created a world ranking system that has advertently terrorised certain European government (and France in particular) into reforming their higher education system. For example, in France, the creation of large campuses and the regrouping of certain institutions is a direct response the perceived lack French universities in the Top 100. In this context the impact of just one Chinese university is enormous.

This rise is perhaps not surprising given the enormous appetite they 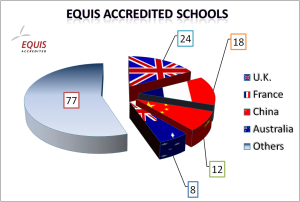 have for improving their higher education institutions. Having arrived late to accreditation China now has 11 business schools with the prestigious European label, EQUIS. Only the UK and France can claim to have more. The business schools that don’t have it all seem to be talking about how it can be obtained. At the same time massive new universities are being built across the country in modern complexes easily comparable to their North American counterparts.

Shanghai University? No, just the library!

Shanghai University? No, just the library.

And within a few years, these universities will be producing 3 times more graduates per year than the USA.  China already graduates 75 000 students per year compared to 30 000 in the USA and 60 000 in India.  These students have changed as well. Anecdotal evidence from professors across the world suggests that the idea of students benignly copying every word of their professor is a thing of the past. At a recent EFMD Conference one Associate Dean of a prestigious Chinese university stated that his problem wasn’t getting his students to talk, it was “getting them to shut up.”  China’s one child policy would seem to have produced a generation of children that expect to be listened to by their elders.

For many years after China opened up the free market, Western countries comforted themselves with the notion that even if manufacturing jobs were being outsourced the intellectual development was still being done in the Europe and North America. This “West thinks, Asia makes” mentality is disappearing fast as major corporations begin to outsource research laboratories and the like. The rapid developement of the university system in China is contributing to this process.

Changing symbols of a unified nation

The news last week was dominated by the commemoration of the terrorist attacks on New York & Washington on September 11th 2001. During such difficult moments people often try unite around their nations. In this context, symbols of the nation become important. However, such symbols will vary from country to country. Read more…

Death (and Rebirth) of a Salesman

Arthur Miller’s 1949 play, “Death of a Salesman” deals with the demise of Willy Loman, an American salesman, who finds his professional and personal life simultaneously degenerating. The play could almost be symbolic for the treatment of the subject as an academic discipline over the past last half century. Business schools hate the word “sales”. We love “marketing” and “finance” and “strategy”, but the word “sales” with its second-hand car salesman connotation, is distinctly unwelcome in the classroom. Read more…

Summertime blues: How much vacation did you really get?

In many countries, it is time to get back to work / school after the summer break. Depending on where you live, this break will have been of varying lengths. Read more….

Research Management: “Research output in China has exploded in the past five years, far outpacing activity in the rest of the world, according to a new report by Thomson Reuters. China has already overtaken the EU and Japan and will leapfrog the US within the next decade, the report predicts.”